How do electrochemical potentials arise?

Voltages and potentials arise between an electron conductor (electrode) and an ion conductor (electrolyte) as soon as they are brought into contact with each other. Charges are exchanged until the system is balanced. Example: If a sheet iron is immersed in copper saline a copper precipitation is formed on the iron. If you reverse the experiment (immerse a sheet copper in ferrous saline) nothing happens.

How do these two metals differ from each other?

An equilibrium between the metal and the liquid arises when they are brought into contact. Metal ions dissolve out of the lattice of the metal which is immersed in a liquid of its own or other metal ions. That is known as solution pressure which is yielded by the difference of the lattice energy and the hydration energy. In return, metal ions are pressed back into the metal lattice by the separation pressure. 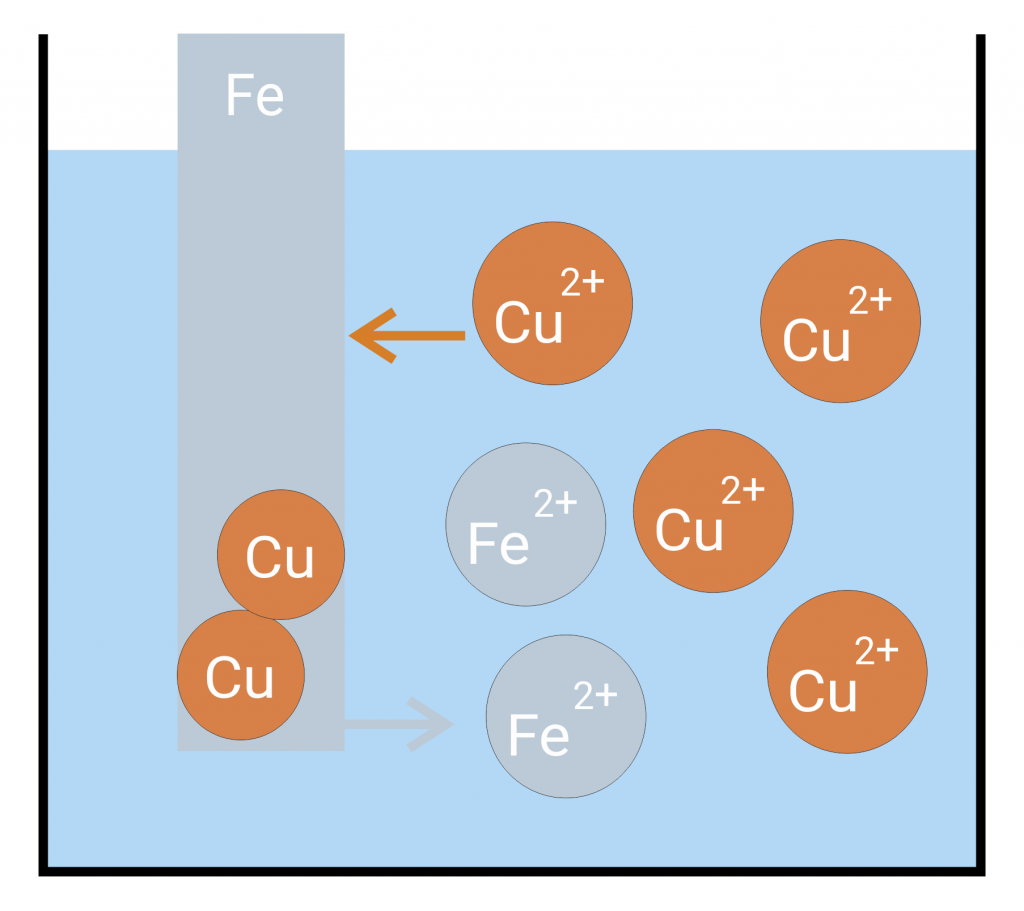 Schematic representation of an iron-copper half cell 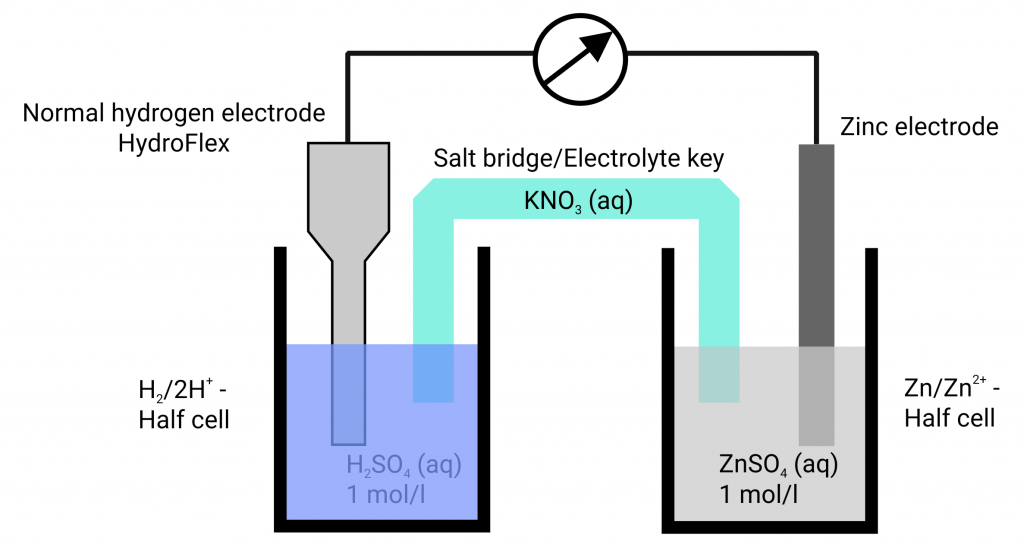 Measurements of standard potentials with HydroFlex as a standard hydrogen electrode

The expected equilibrium potentials of different systems at standard conditions (25°C, metal ion activity 1 mol/l) are collated in the electrochemical series. Metals with an equilibrium potential lower than 0 V are designated as ignoble. If the equilibrium potentials are higher than 0 V the metals are designated as noble.
In accordance with the electrochemical series you can also state equilibrium potentials of non-metals and their ions as well as ionic compounds and their charge reversals. If a reactant is oxidised a reduction product forms. Reversed, an oxidation product forms if a reactant is reduced. So, there are always redox couples. The equilibrium potentials are a measure for the oxidation or reduction capacity. The more negative the potential is all the easier the metals emit electrons. They are oxidised and function as a reducing agent. The higher the potential is all the more complicated it is to oxidise electrons. Instead, they are easier to reduce and thus function as an oxidant. The expected voltages for various combinations of half cells can be calculated with the standard potentials. Predictions about possible or impossible chemical reactions in aqueous solutions can be made. The convention E = E (right) – E (left) is authoritative for the calculation of the expected voltage. 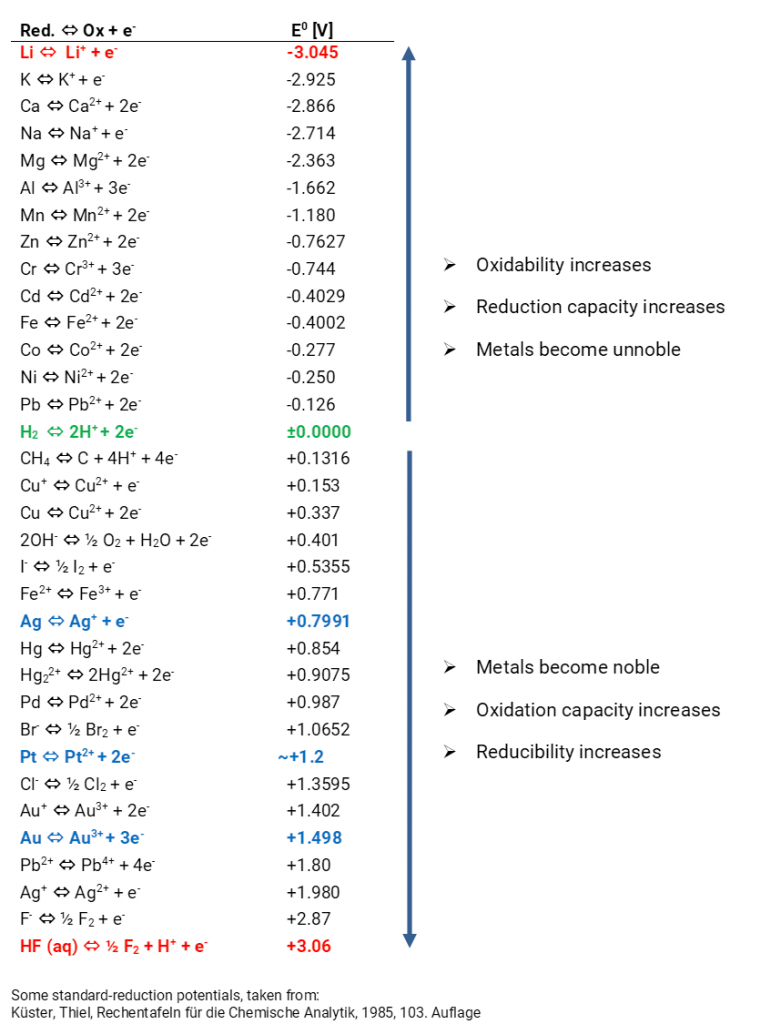 Excerpt of the electrochemical series

Activity and concentration – both terms are used in the electro chemistry. But what is the difference?

Universal definition of the activity (does not correspond to the physicochemical definition) according to Jander, Jahr; Maßanalyse; 15. Auflage, 1989, de Gruyter:

a = y c c = concentration of substance in mol/l (molarity)

a = γ c c = concentration of substance in mol/kg (molality)

All three terms stand for a voltage difference between two systems. If the reference point for the measurement is known you speak of a potential otherwise you speak of voltage.
Electromotive power means the potential difference of a cell which is measured if the cell works reversible and no current flows.

Conversion of the potentials of common reference electrodes

The algebraic sign of the measured potentials shows which electrode is more positive, in which direction the current flows and which of the reaction runs spontaneously since the potential is directly related to the equilibrium constant of the reactants. E > 0 for E(right) > E(left) means that the right electrode is positive charged towards the left electrode.

There is a shortage of electrons on the right electrode caused by the reduction of particles. That electrode is also called cathode where the reduction happens. Therefore, the electrode flow from the left to the right. Thus, the electric current, unfortunately defined as a flow of positive particles, flows in opposite direction. On the left electrode there is an excess of electrons since there particles are oxidised. That electrode is called anode where the oxidation takes places. By trend, the reaction runs spontaneously from the left (oxidation) to the right (reduction). E < 0 for E(right) < E(left) by implication means that the reaction runs spontaneously from the right to the left.

In our opinion, HydroFlex should be part of every school’s equipment since the standard potentials can be measured conforming to standards at simple systems. You can use HydroFlex in a beaker with sulphuric acid or hydrochloric acid (concentration of 1 mol/l) and get a standard hydrogen electrode instantly. Connect that vessel with the to measure system via a salt bridge (easiest case: a filter paper soaked in KNO3). Your students can directly read off the standard potentials at the multimeter and compare them with the tables. 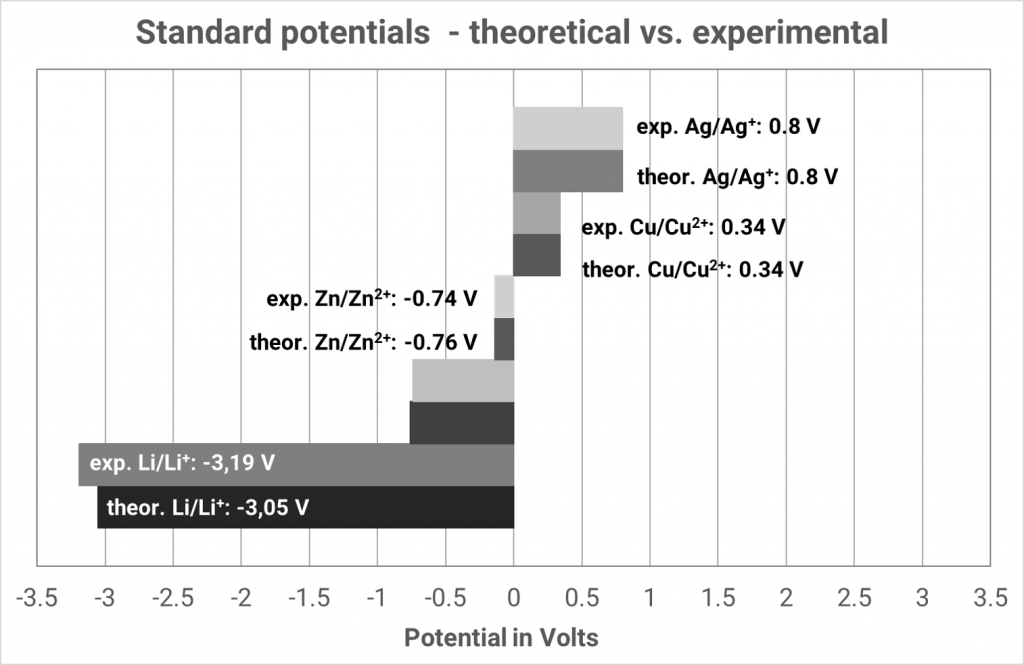 Risk assessment: Messung von Standardpotenzialen, Redoxpotenzial und Konzentration You can find more information or suggestions for the use of HydroFlex in school here: www.fachreferent-chemie.de. 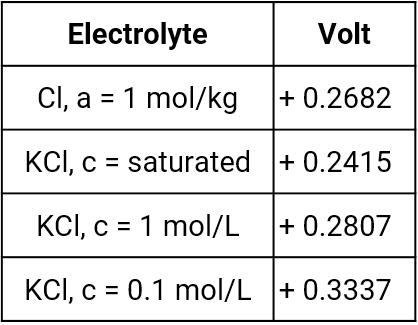 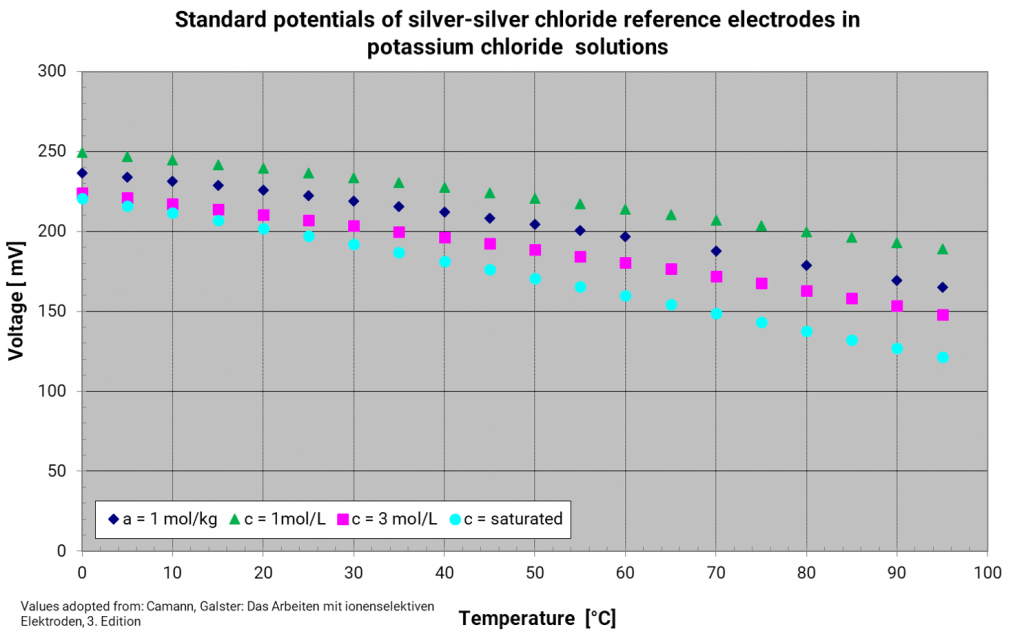 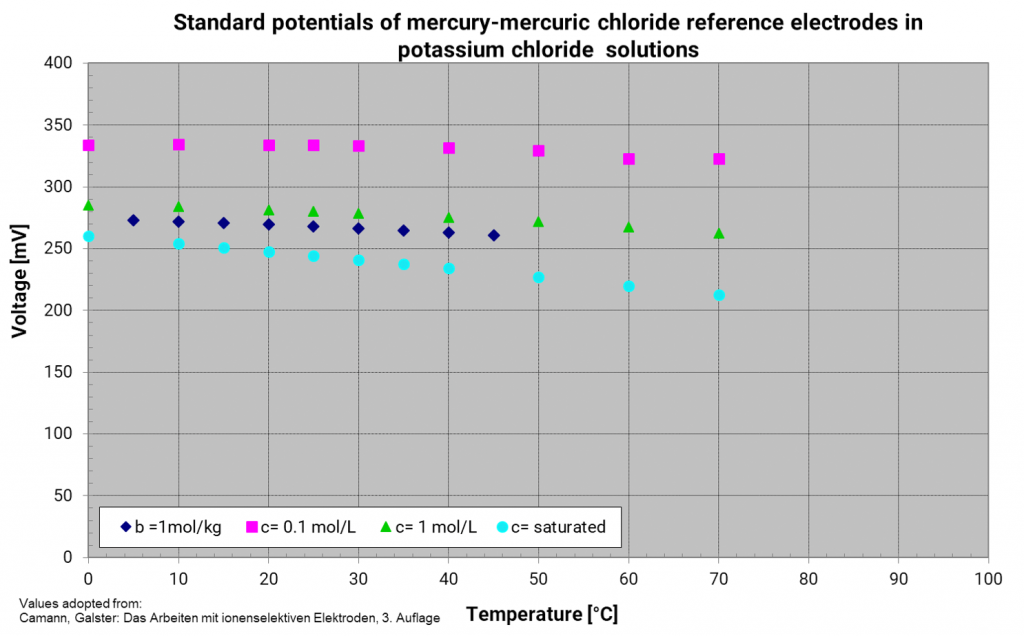 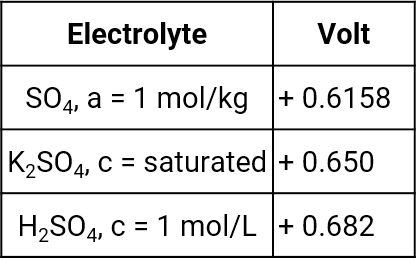 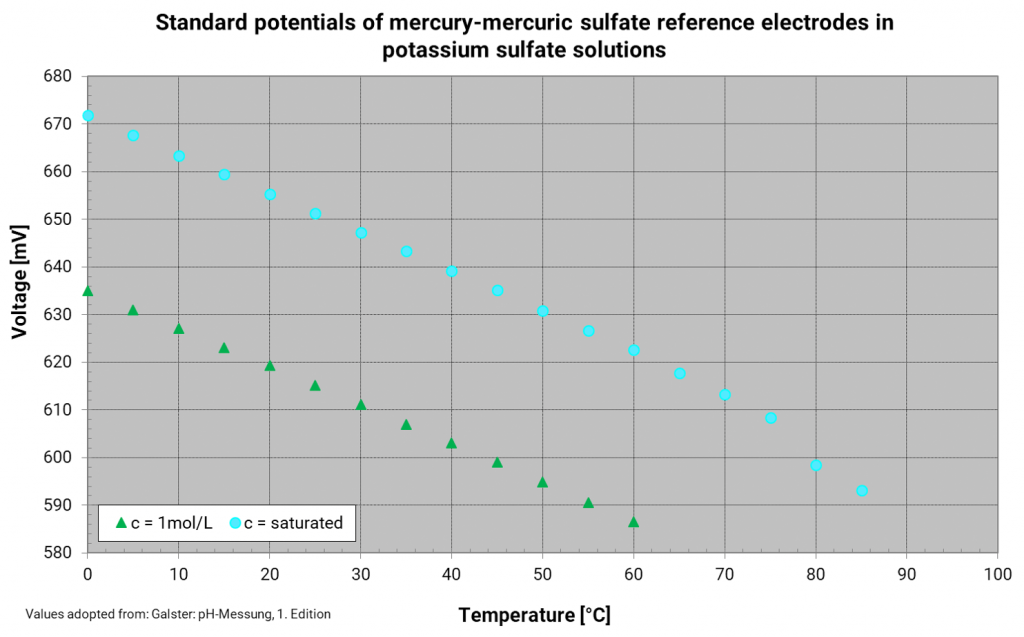 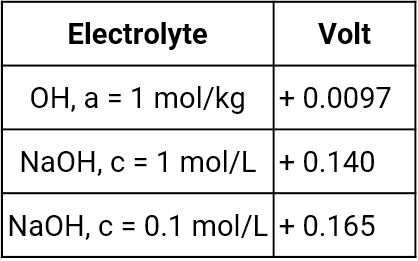 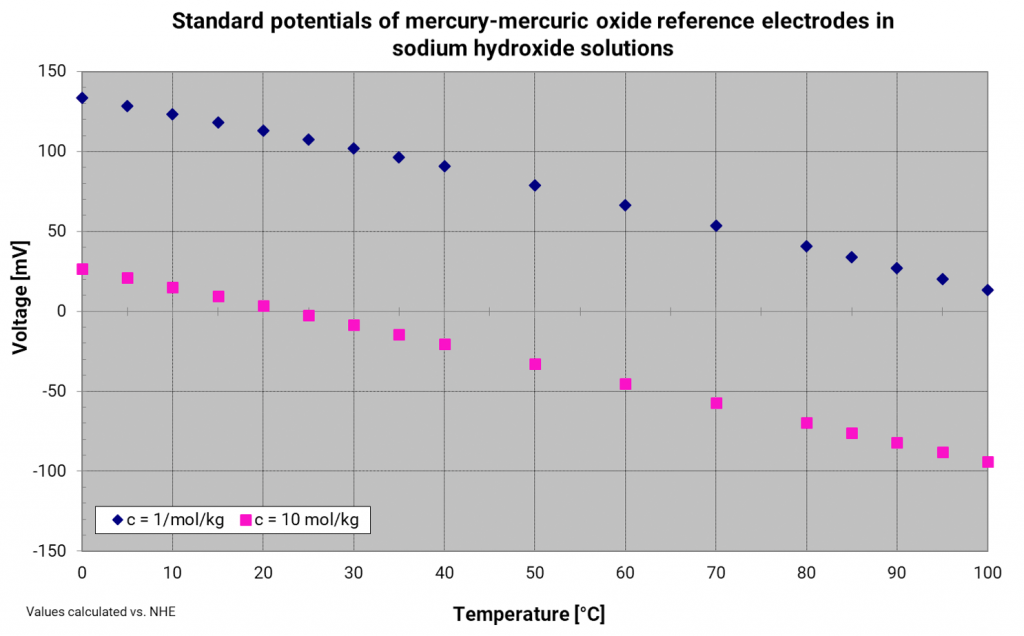 An electrolyte bridge, or salt bridge, is used for the contacting of various electrolytes. The diaphragm is here the ions conducting contact point. In the salt bridges of commercial reference electrodes one can find diaphragms made out of ceramics, platinum twine, grindings, slightest bores, capillaries such as the Haber-Luggin-Capillary, fibres, fabrics such as pellon or robust teflon. 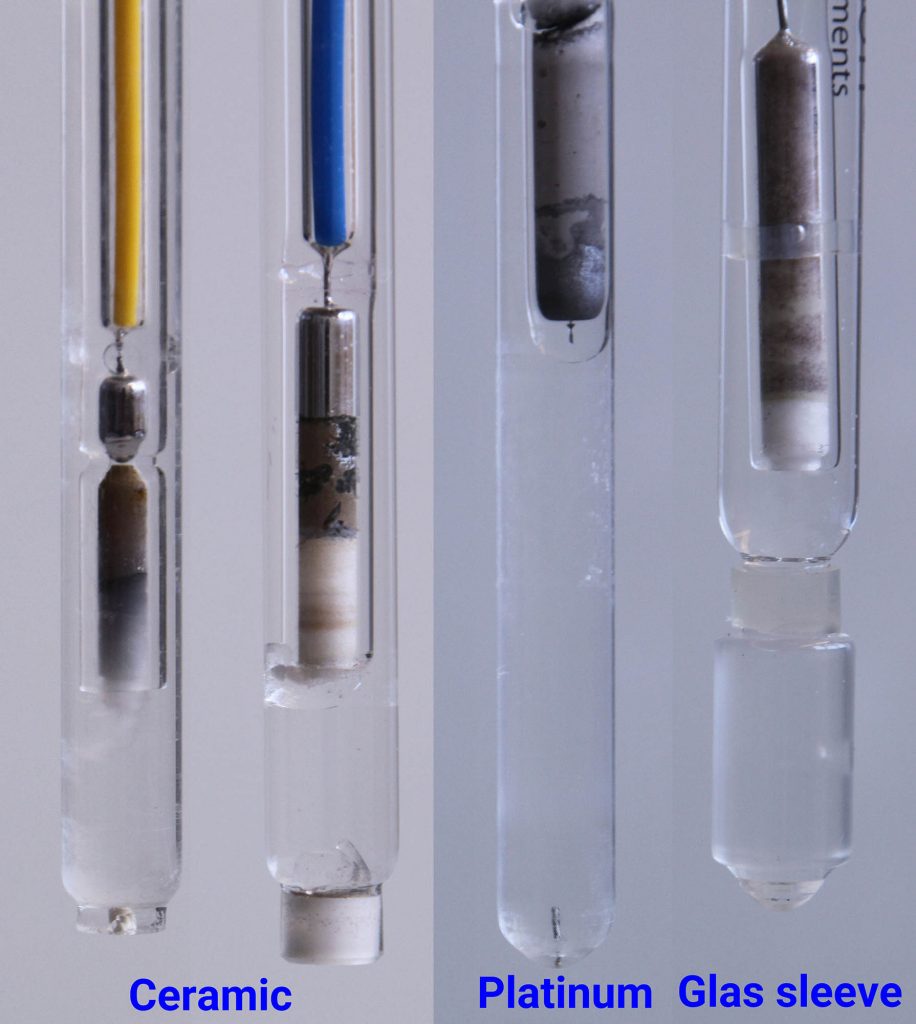 Commercial reference electrodes rely on salt bridges. The connection to the measuring solution is made by a diaphragm which is usually made out of ceramics, platinum twine or grindings.

Diaphragm: Characteristics of the most used materials, composed out of Galster, pH-Messung, Wiley-VCH, 1990

The various materials have different rates of flow which depend on the porosity of the material and the size of the diaphragm. Also, the workmanship in the production of the reference electrode, damages, contaminations in the diaphragm can affect the rates of flow.

Rates of flow of various types of diaphragms, taken from Galster, pH-Messung, Wiley-VCH, 1990 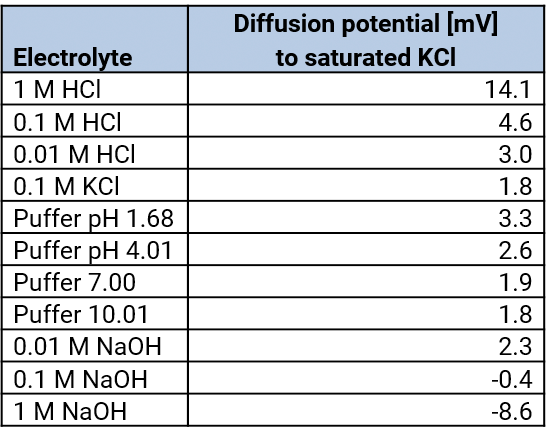